You are here > Music > Jubilate: 500 Years of Cathedral Music

Album in support of ‘Diamond Fund for Choristers’ 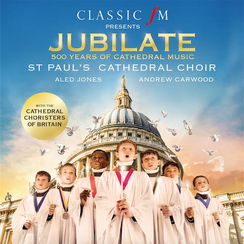 St Paul’s Cathedral Choir has joined forces with 50 young choristers from cathedrals across the UK for a new album entitled ‘Jubilate: 500 Years of Cathedral Music’, released by Decca Classics and Classic FM on 17th March. The cathedral super-group is directed by Andrew Carwood and includes former choirboy Aled Jones.

Every copy of the album sold will raise money for the ‘Diamond Fund for Choristers’, which aims to help young choral singers and secure the future of cathedral music. It is supported by Classic FM presenter Alexander Armstrong – a former choirboy himself – who hails becoming a chorister as “the greatest leg-up a child can be given in life”.

The album, which celebrates 500 years of cathedral music with a host of famous choral tunes, was recorded in the astonishing acoustics of St Paul’s Cathedral – with its 8-second echo. St Paul’s Cathedral Choir has been performing in London’s iconic venue for nearly 900 years, making it one of the world’s oldest and most illustrious cathedral choirs.

The songs on the album span five centuries – from Thomas Tallis’ Salvator Mundi to Paul Mealor’s Ubi Caritas, with Handel, Mendelssohn, Vaughan Williams and more between. There is also a special arrangement by John Rutter of A Gaelic Blessing, sung by Classic FM presenter Aled Jones. Most of the music chosen for the album was written by composers who themselves were former choristers, from William Byrd and Henry Purcell (Westminster) to William Walton (Christ Church, Oxford).

The young singers of St Paul’s are joined by 50 additional choristers (one representative from the vast majority of the UK’s cathedral choirs) for four tracks on the album. The massed voices can be heard in glorious sound on Handel’s Zadok The Priest, Parry’s I Was Glad and Rutter’s A Gaelic Blessing.

“What an amazing place to record an album! I’ve never seen so many choristers from cathedrals all around the country. When I first heard them sing all together, it was phenomenal – there were tears in people’s eyes, it was just so moving. It is wonderful to capture that on an album, and for me to sing with the choir as well was just fantastic.”

“I hope this album gives listeners a glimpse into the little bit of heaven that we try to create every day in St Paul’s Cathedral.”

The choristers of St. Paul’s Cathedral Choir are enthusiastic and highly trained, and used to a seven-day week including services on Easter Day and Christmas Day in the world-famous cathedral. In 2015, the choir released a hugely successful album of carols, which went to No.1 in the UK specialist classical chart.

‘Jubilate: 500 Years of Cathedral Music’ is available now to pre-order:

Some of these cookies are essential to make our site work and others help us to improve by giving us some insight into how the site is being used. This information is collected anonymously.